No One Goes to Kindergarten in a Diaper 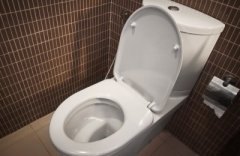 We started potty training our oldest son the month he turned two. Never mind the fact that he had only come into our lives four months prior, or the fact that there were very evident – if undiagnosed – developmental delays. As I said to the concerned social workers, therapists, doctors and family members, Everyone knows that potty training starts at two. He’ll get it. No one wants to sit in their own poo. They all expressed their beliefs that he wasn’t ready to train. Boys start later, they said. You have to watch for cues. He’ll let you know when he’s ready, they all said. But, don’t worry – no one goes into Kindergarten in a diaper.

You’re damn right they don’t, I thought. Especially not this kid. And so began my obsession with my son’s bowel habits. I charted times, texture, and fiber content. I watched for telltale signs of pants pooping and became an expert peepee dancer wrangler. I bought all the accoutrements: Potty Scotty video and doll, every single NickJR and Disney character potty video, shelves of books, my husband and I brought him in with us when we did the deed. I did intermittent rewards of preferred activities and edibles. We did CELEBRATIONS every. single. time. he. peed. in. the. pot. Every time. For years we raised our hands in the air; we raised ’em like we just didn’t care. Do you have any idea how old it gets to celebrate basic bodily functions for a kid you’ve been training for close to five years? I have to say, the joy is over. The excitement is dry as dust – certainly much drier than the fourth Pull-Up we’ve gone through this day.

After a year of training, and as he turned three, I began bringing my concerns to those same social workers, therapists and medical professionals. Without exception, they all said the same things: No one goes to kindergarten in a diaper. He’ll get it. Have you tried using a sticker chart? My head would explode just a bit as I tried to explain for the nth time that yes, for the love of God, I’ve tried a sticker chart. He doesn’t give one shit – literally – about sticker charts. What else can I do? Their limp suggestions of intermittent rewards, trip training, charting, and, oh, God, my favorite Have you let him just wear underwear left me shaking my head in frustration. Yeah, because his penchant for sitting in his own stink and urine soaked Fruit of the Looms would make my house smell like a Port-O-Potty in two days, tops. Not gonna happen. What else you got? *crickets*

And for the past 4 years, 11 months we’ve been looking for that solution, that magic motivator. We’ve tried Cheerios in the toilet and target practice. We’ve tried special character underwear. We’ve even broken down and tried the freaking sticker chart – repeatedly.

It isn’t as though I am a complete failure as a potty training parent. I have a completely trained 17 year old (yay, Alex! Mommy’s big girl!). Our six year old on the spectrum is trained. Clearly, I am doing something right with 50% of my children. Although, to be fair, Gracie is only six months old. The verdict is still out on her skillz. But our oldest son is a tough nut to crack. Is this a control issue, a component of his comorbid disruptive behavior disorder, or contrary to medical opinion, is it a physiological issue?

What more can we try? He’s at a point now where his man-turds completely require immediate showers. I’ll spare you the details, but, nooks and crannies, People. Nooks and crannies. For bed time, we have to double up a Pull-Up with an UnderJam, throw down a GoodNights “chuck” and layer that with a cloth and vinyl incontinence pad, and I still have to wash his bedding several times a week.

The bottom line is that he really doesn’t care. He doesn’t see the need to go in the toilet. He’s fully capable at times. There have been a few spontaneous self-initiated trips to the toilet. A few in five years. That doesn’t leave much to go on. Anyone have a kid older than seven get potty trained? What was the trick? Give me hope that I won’t have to scrub poo off of his kibbles & bits forever, would you?

77 comments on “No One Goes to Kindergarten in a Diaper”