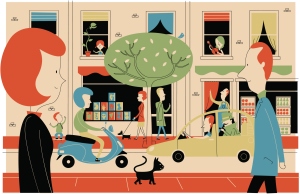 I’ve been pretty vocal in my posts about how wonderful the internet is; how I’ve found my tribe online. And it’s true. I have. And, if you’re reading this, chances are we are tribe-mates. We know so much about each other. We’ve shared intimate details about our children and their challenges. We’ve formed friendships and relationships as real as any I’ve ever had “in real life.” We’ve raised funds for our friends together, sent virtual casseroles, laughed, cried, prayed and hoped with and for each other even though we’ve never met. I know your husband’s name, your kids’ favorite shows and scripts, hell, I may have even seen a picture – or three – of your chest.

But I don’t know my neighbors.

Not in the sense that I’ve never been on the receiving end of drunken chest texting, but in the sense that I. Do. Not. Know. Them. Never met them. Couldn’t tell you their names, what they look like, what they do, if they have kids or pets. Nor do they know me. They don’t know my kids. They don’t know our challenges, our needs, or the fact that my oldest son with autism is starting to bolt. And that’s a real problem.

Do you remember back “in the day” when we were kids? How old Mrs. WhatsHerName would sit on her front porch and watch the ‘hood like a hawk? She knew the neighborhood work schedules, school schedules, who went where, who was dating whom, and whether or not you were doing something that was wrong. Somehow, she always knew that, no, it was not, in fact, a day off from school – and you’d better get your butt to the bus stop, pronto! She knew that Little Johnny was over to Billy’s house. She knew the neighbors. You knew the neighbors. You were  neighborly in the truest sense of the word. You were invested in the lives of these people; and they in yours. You interacted with birthday parties, block parties, wakes and baby showers.

And it was good.

We don’t have that now. You don’t know the ladies who work at the bank, the butcher, they guy who owns the gas station. Maybe this sounds idyllic and Mayberry-esque, but for many of us, this was reality. We need that again. We need to look out for each other, and look in on each other. We need to know that our neighbors are there, paying attention and looking out for our kids, and we need to make the commitment to do the same. Real life interaction.

The internet has been wonderful for research, keeping up with friends long since moved away, and, for military servicemembers to keep in touch with their spouses (hint, hint!). But it seems to me as though it may be part of the reason why so many terrible, seemingly unheard of before crimes are occurring. Somehow these crimes, though horrible, are happening on the other side of the lens. We’re not involved from our living room. It’s someone else’s problem. Someone else’s neighborhood. Someone else’s tragedy.

It’s great to offer help and support to your counterparts online, but, wouldn’t it be a shame if two doors down a mom was struggling? And you didn’t know it? You could help – but you don’t know of the need.

Until it was too late.

It’s time to put the humanity back in humankind.

3 comments on “Back to Basics”

This entry was posted on January 21, 2014 by militaryspecialneedsnetwork in A New Year, A New You, military special needs network, Motivation, MSNN and tagged borrow a cup of sugar make a friend, get back to basics, help our your neighbor, internet is fall of mankind, meet your neighbors, putting humanity back in humankind.