March is Developmental Disabilities Month. MSNN will be highlighting a different developmental disability each blog post this month in an effort to educate, inspire and connect our families. If you would like to guest blog, please email Kelly Hafer (KellyHafer@MSNNblog.com). Thank you. 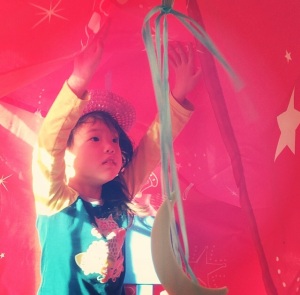 Little Miss is six and March 12, 2014, was her one-year anniversary of being seizure free. She was diagnosed with epilepsy at age three – after having 3 unprovoked seizures over the course of two months… but that wasn’t our first run in with the most commonly known symptom of this disorder. That came much, much earlier.

I was taking a barely-two-year old Little Miss up to bed. She had a fever – a pretty high one – and after giving her a little children’s Tylenol, I was ready to settle in with my sleepy sickie. Suddenly, Little Miss gasped and her body went rigid. Her breathing became labored and her limbs moved in an almost mechanical way. I yelled for my husband who immediately called his sister – a pediatrician at a local children’s hospital. By the time we got my sister-in-law on the line, the seizure was over. Little Miss was in a deep sleep (which we later learned is called the “postictal state”). My sister-in-law told us we had nothing to worry about; Little Miss had just had a febrile seizure (a seizure, common in infants and toddlers, characterized by a rapid increase in body temperature).

A few febrile seizures down the road, Little Miss had her first unprovoked seizure. I checked her temperature – and then checked again… but she was normal. We were on our way to a diagnosis of epilepsy.

The diagnosis of “epilepsy” or “seizure disorder” is often given to a person who has suffered more than one unprovoked seizure. The condition can be caused from a wide array of neurological conditions – from brain injury or stroke to genetic predisposition. There is no cure for epilepsy, but there are a number of treatment options – from medication and diet to surgery – that can put the condition into a remission state.

Many people associate epilepsy with the type of seizure Little Miss has – called “tonic-clonic” or “grand mal” seizures, but there are number of different ways seizure activity can present. Seizures are generally categorized into two different groups: “Primary Generalized Seizures” and “Partial Seizures.” These groups include the following seizure types:

The web site, Epilepsy.com has great descriptions of the different types of seizures, here.

Little Miss’s seizures were treated successfully for a time using a medication called Lamictal. But, nearly a year after her initial diagnosis, we found ourselves in seizure trouble again. We tried increasing the dosage of Lamictal, but Little Miss kept having more and more seizures. So, we opted for a stay in the pediatric epilepsy monitoring unit. It was because of that stay that we learned some assumptions we had made about Little Miss’s seizure activity were wrong – she needed to be switched to a new medication to adequately treat her particular blend of epilepsy.

I hope our story has helped you learn a little more about epilepsy, but before I wrap up this post, I wanted to share a few tips and resources with parents who may be facing an epilepsy diagnosis for the first time.

By far, the most important advice I can offer, is to find a support group for epilepsy parents. Watching your child suffer through a seizure that you cannot stop is one of the worst things a parent can go through – but not being able to find the right professionals to help her is even worse. During our second battle with epilepsy, I relied heavily of referrals from parents who had been there. Not only did these parents make me feel like I could keep going, they shared their experiences with professionals and treatments available to us.

Many local hospitals and neurology departments offer epilepsy support groups, or you can try contacting the Epilepsy Foundation to see if there are any groups in your area.

Some other resources we have found useful include:

Mom2MissK blogs about her adventures with Little Miss at Beyond the Dryer Vent. When she’s not chasing Little Miss off on her next adventure, she also writes parent resource guides for Connecting for Kids, a non-profit support organization for families in the Cleveland area with concerns about their children’s development.